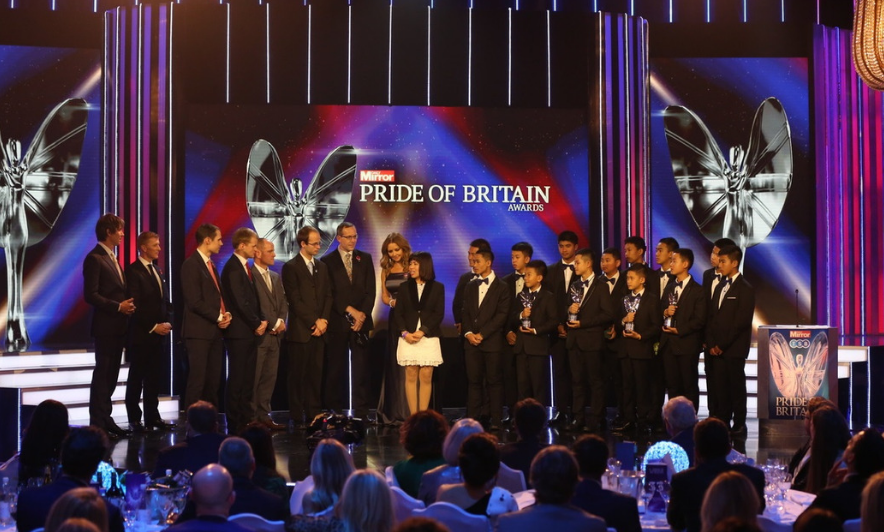 The Pride of Britain Awards give us faith in humanity as they celebrate and recognise some of our most inspiring Britons.

Thousands of nominations from the public are submitted for recognition of courageous, brave and outstanding individuals from everyday walks of life. A judging panel narrow down the shortlist and pick the winners (and we thought judging business awards were hard!). This year’s judging panel included Ben Shepherd and Susanna Reid, Coronation Street star Kym Marsh, broadcasting legend Sir Trevor McDonald, and Police Commissioner Cressida Dick.

Amongst the winners were 11 year old Ella Chadwick who won the Child of Courage Award for her amazing positivity and fundraising following numerous operations on her liver, and finally a liver transplant which saved her life. You can read Ella’s story here.

One of the most poignant parts of the evening was the moment the 12 young Thai boys who were trapped in a flooded cave in Thailand were reunited with their rescuers. The British Cave Rescue Team were awarded for their outstanding bravery as they escorted the boys one-by-one through the complex and dangerous cave system 10km underground.

The Lifetime Achievement award went to Eddie O’Gorman OBE, who founded the charity Children with Cancer UK alongside his late wife, and in memory of his two children. The charity has raised over £230 million since 1987 and was back by Princess Diana.

Inspirational recognition means different things to different people, but it has one key attribute. It is there to recognise and celebrate the people who genuinely change things for the better for others. Whether that’s in a professional, charitable, or a personal capacity.

Every year we are delighted to work with the colleagues, families and friend of outstanding individuals to make sure that their legacy is never forgotten, and they are rewarded for their contribution to society.

Thanks to these individuals, we have a better future, whether that’s through their incredible contribution to charity, their inspirational impact on their profession, or their influential nature that changes life for the better.

Receiving a personal honour from Her Majesty The Queen, like an MBE, OBE, CBE or even a knighthood, is often the result of years of hard work that the individual has undertaken.

Our experience of helping individuals to achieve this recognition is second to none, and starts with an outstanding nomination that supports all the key criteria for a relevant award. And they don’t have to be a Briton, recognition is possible for all individuals across the world if they are doing good work in the UK, or for Britons who are doing good work at home and overseas.

But it’s without this experience, it’s hard to know whether your candidate is really likely to succeed with their nomination. You don’t need to be an action hero to be recognised, just someone working to make life better for others in your own way.

If you would like to recognise someone for their outstanding achievements we can help you with a free assessment of their likelihood of success, and tell you everything you need to know to get you on the winning track.

So the question is…who would you like to receive the most inspirational recognition in the world?

Take a look at our Queen’s Honours service for more information and get in touch today.